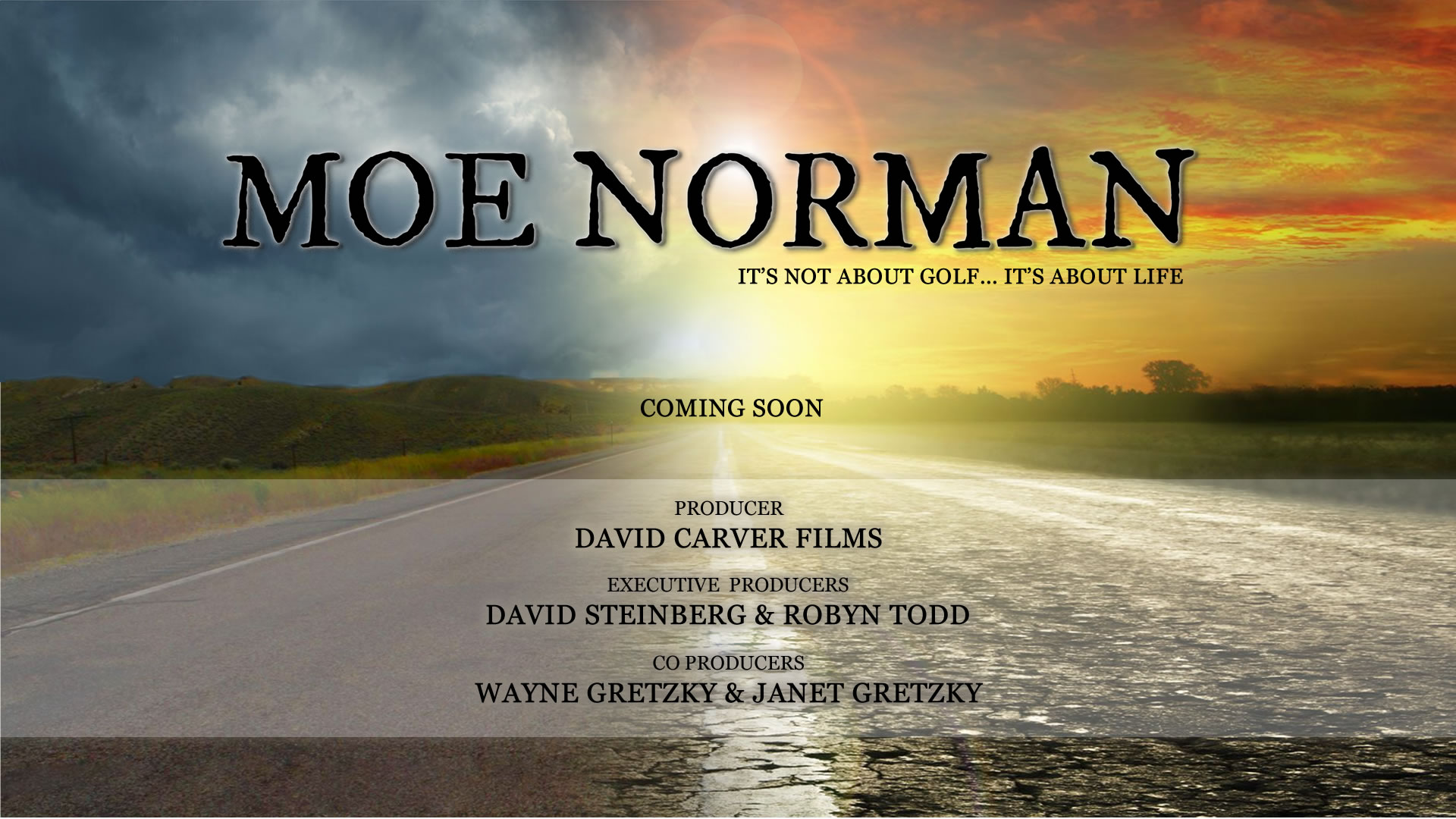 The US-Canadian Production is set to shoot in early summer 2022, with casting by renowned casting director Valorie Massalas (Back To The Future II & III, Indiana Jones and The Last Crusade, The Wedding Ringer, Obsessed, Gods and Monsters (Casting/Co Executive Producer).

Steinberg and Todd said, “In these times, it is so important to share stories about acceptance of others and triumph over adversity. This is a beautiful, touching film with heart, about a Canadian underdog, and it needs to be told.”

The Gretzky’s added, “We first became aware of Moe through my father (Walter) who was his great friend and constantly shared incredible stories of this bigger than life character. Moe’s true brilliance and simple life philosophies were often overlooked by his colorful, sometimes ragged clothes, warn shoes and visors, his repetitive speech and eccentric behavior. His story exemplifies one of life’s great lessons: be true to yourself.”

The best-in-the-game call him the best, but the introverted, misfit Moe Norman collided with both the golf establishment and society itself. Despite being bullied out of the major pro tour, Moe became an unknown legend, playing and winning smaller tournaments, setting course records but living hand to mouth, sometimes sleeping in his car or in sand traps at the courses he played.

David Carver said, “My 20-year quest to make this film is fueled 98% by passion and persistence. Obtaining the exclusive support, trust, rights, unique stories and research of over 30 beneficiaries of Moe’s estate, his immediate family, including his twin sister Marie, and close friends including Gus and Audrey Maue and Ernie Hauser is the foundation making this a film that audiences will discover is not a story about golf… 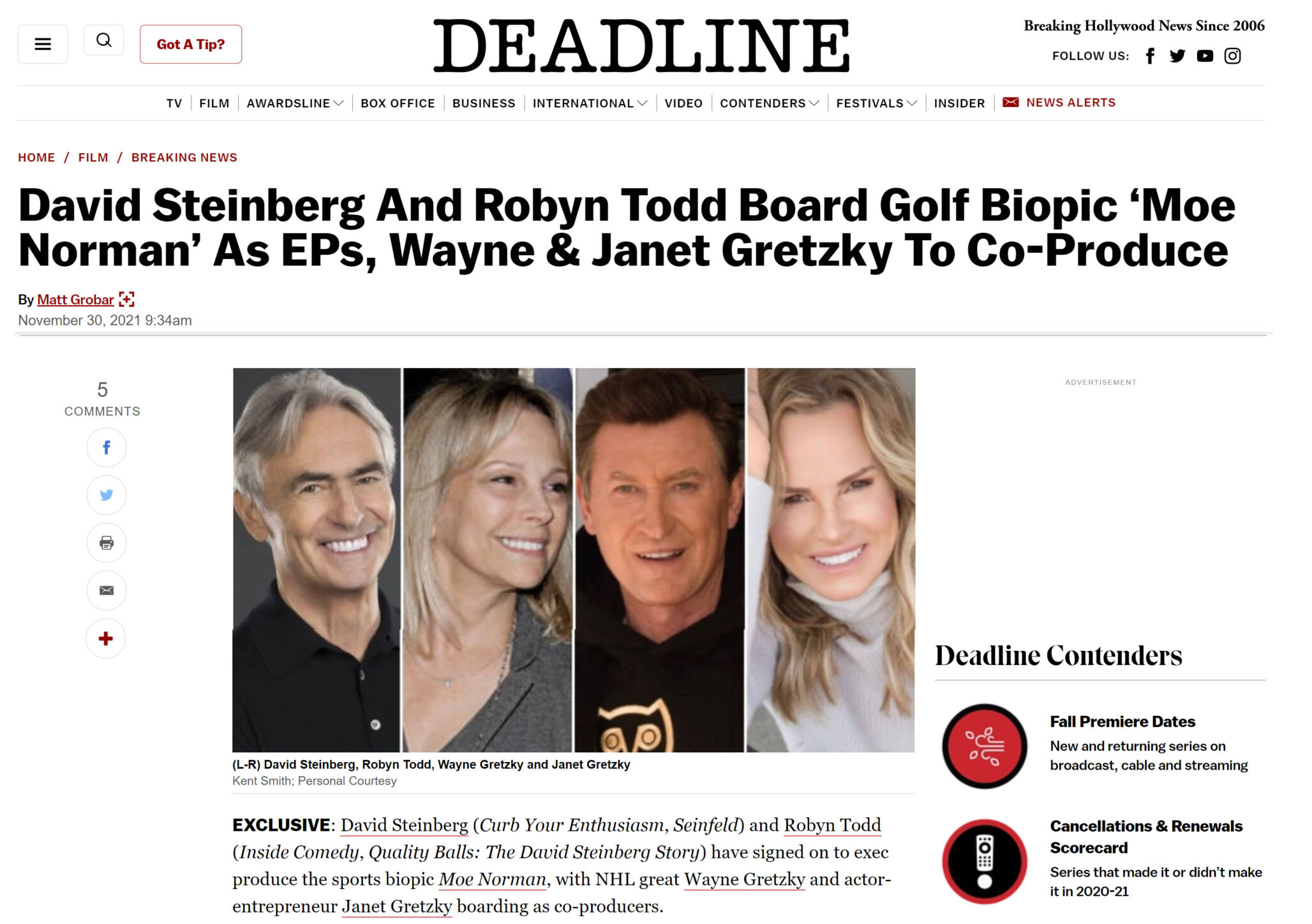 Wayne Gretzky, Janet Gretzky co-producing movie about Canadian golf legend Moe Norman The stories about Moe Norman are legendary. Like the time he once landed a drive on a bridge to reach the green instead of laying up to avoid a creek. Or how when a caddie once told him he could reach the green with a good drive and a 9-iron, Norman then teed off with a 9-iron and found the green with his driver off the deck. More...

“We first became aware of Moe through my father (Walter) who was his great friend and constantly shared incredible stories of this bigger-than-life character,” said the Gretzky’s via a press release. “Moe’s true brilliance and simple life philosophies were often overlooked by his colorful, sometimes ragged clothes, worn shoes and visors, his repetitive speech and eccentric behavior. His story exemplifies one of life’s great lessons: be true to yourself.”  More...

Moe Norman will have a feature-length movie made about his life. And another Canadian sports legend will play a key role. Wayne Gretzky and his wife Janet were announced on Thursday as co-producers of the upcoming film about one of golf's most mythical figures. Norman, who died in 2004, has been called one of the greatest ball-strikers of all time by players like Tiger Woods and Lee Trevino. More...

Assuming the stars align — Hollywood stars, that is — the long-awaited feature film based on the life of Kitchener golf legend Moe Norman could begin shooting in June. First-time filmmaker David Carver, who announced earlier this week that David Steinberg and Robyn Todd have been attached to “Moe Norman” as executive producers, said he is “100 per cent optimistic” that filming will take place in the summer of 2022. NHL great Wayne Gretzky and actor/entrepreneur Janet Gretzky are attached, and Valorie Massalas is on board as casting director.

Wayne Gretzky is set to co-produce an upcoming biopic on Canadian golf legend Moe Norman. The hockey great and his wife Janet has joined a team that includes comedian David Steinberg ( Curb Your Enthusiasm, Seinfeld, Friends, Mad About You, Weeds ) and long-time film executive Robyn Todd to bring the story of the eccentric golfer to the big screen.

Wayne Gretzky is helping bring the life of Canadian golf legend Moe Norman to the big screen. Norman, who died in 2004 at the age of 75, was a phenomenon in the amateur golfing circuit in the 1950s and 1960s and was considered by many to be the greatest ball striker in the history of the sport.

For over 30 years David Carver has been an entertainment entrepreneur, first as a successful concert producer, helming tours and tour dates with the greatest names in music including Tom Petty and The Heartbreakers, Aerosmith, Bob Dylan, Blake Shelton, Bob Seger and The Silver Bullet Band, Sheryl Crow, Celine Dion, Bryan Adams, Metallica, Rod Stewart and more.

Many years ago, David became aware of the Moe Norman story and while “anyone can make a movie about Moe,” David felt that securing the trust and approval of Moe’s family and closest friends was both the ethical thing to do, as well as artistically, a requirement. “The most provocative and universally resonating telling of Moe’s journey and the depiction of the depth of his life had to include those closest to him. I am honored that Moe’s family and friends entrusted me with their Moe stories. Those stories enabled the writers to delve into the complicated relationship with his parents and siblings and the incredible, close friendship with Gus and Audrey Maue and Ernie Hauser. Through them the film follows multiple thematic throughlines which will surely resonate with a global audience.

It’s heart wrenching, heartwarming, hilarious and poignant, revealing among many other things, lessons we can all learn from Moe’s journey from the age of 5 to 75.